The Hall of Honor was an idea that originated during a joint meeting of representatives from the BISD Board of Trustees and City of Bryan City Council.  Representatives wanted a way to recognize outstanding and notable Bryan school graduates.  From these discussions, the BISD Education Foundation became involved.

The Hall of Honor process begins with a call for nominations.  A select committee reviews nominations, narrows the list and requests more information from selected nominated individuals, and then makes the final selection.  Individuals are chosen based on their achievements, strength of character, and citizenship – and whose lives serve as models to inspire and challenge today’s students.  Hall of Honor nomination categories include Arts/Humanities, Business/Industry, Community Service, Education, Public Service, Recreation/Athletics, and Special Recognition.

The mission of the Bryan ISD Education Foundation is to assist the Bryan Independent School District to achieve excellence.

We thank you for your continued support as a donor!

Education Foundation Board of Directors

Activities: Football was the big one for me followed closely by Baseball.  I was blessed to be able to play Varsity on both for all three years at BHS.  And learned so many life lessons from my coaches and teammates.   I also enjoyed being involved in Student Council.  I learned a lot about leadership and organization by being involved, but probably learned the most from losing the race for Student Body President about not giving up and to keep on trying no matter the set-backs you encounter.
Favorite Classes: Junior Block (English and History) and Biology
Favorite Teachers:
All my coaches lead by Coach Merrill Green
Carolyn Lampo and Imogene Vetters in Junior Block
Debra Richards in Biology
Stories:
Funny – Too many to tell about off-campus lunch every day. When I think about it now I am amazed we all survived racing down Highway 6 to Post Oak Mall to have lunch in the Food Court and then get back to school in time.  Many of those round-trips included some form of a food fight between various cars.
Funny – A couple of Senior year pranks including forming a large ’88 out of styrofoam peanut shells in the front yard of our Principal’s house – Mr. Kirby.
Serious – A distinct memory of being in class the morning the Challenger Space Shuttle exploded during my Sophmore year and the silence that took over the entire school.
Serious – Facing the challenges of being one of two Sophmores on the Varsity Football Team and adapting to being around a group of older guys and figuring out how to fit in while not losing connections with the friends in my grade.
Serious – Recovering from knee surgery to be able to play my Senior year and all long hours of rehab as well as all the support I received from my family, coaches and friends.

Favorite classes: Biology I and Biology II were the favorites!

In Biology, we were learning the skeletal structure of cats. As we manipulated the cadaver, one of the bones broke.  Mrs. Frieda’s comment was, “Isn’t that ‘humerus’!” It was the humerus bone that broke and we thought that was just the funniest comment ever.  I will always remember which bone is the humerus bone because of that incident.

Thanks to all the dedicated teachers and administrators, I was prepared to enter college.  I know that Mrs. Frieda did a super job as I felt that I had a much better understanding of material in my college level Biology classes than other students.

Connie Smotek is a native of Bryan, Texas and received a Bachelor of Science degree in Animal Science from Texas A&M University.  After graduating from TAMU and living elsewhere for several years, Connie returned to Bryan/College Station and began working in the Department of Agricultural Economics at TAMU in 1995.  From 2001-2017, she worked as an administrative assistant for Dr. Wayne Hayenga, a lawyer with Texas A&M AgriLife Extension, who specializes in farm and ranch estate planning. After completing a Master’s degree in Accounting in December 2016, she is now an extension program specialist and takes a greater leadership role in the work she continues to do for Extension.

Connie joined the Brazos 4-H Sportsman’s Club in 1978 as the first girl in the club. Driven by a love for the sport of international skeet and a competitive nature, Connie made the Olympic Shooting team twice, in 1992 and again in 2004. In 1992, men and women competed together and she enjoyed the honor of being one of six women in the world in the skeet event. In the 2004 Olympic Games she finished sixth. She traveled to many countries, including Australia, Germany, Italy, Egypt, Cuba, and China, to name a few. Over the course of her competitive career, she won 10 US Women’s International Skeet National Championships, set a world record, and won 5 international events. Connie was an active competitor until 2011.

As a volunteer of the Brazos 4-H Sportsman’s Club, she helps coach club members at all skill levels. It gives her great enjoyment to help someone be successful both on and off the range. She also currently serves as a board member of the US Center for SafeSport.

"I loved my English literature classes. Both of my teachers were gifted and in one class  I could read anything I wanted for extra credit. I never stopped reading books after that."

Dr. Clifton was founding Chair of the Department of Neurosurgery at the University of Texas Medical School at Houston where he served for 22 years and held the Runnells Distinguished Chair in Neurosurgery. He is author or co-author of over 100 scientific publications. Clifton was named among best doctors in US for 8 years & Who’s Who in the World or America for 6 years. He is a member of the Academy of Distinguished Former Students of the Texas A&M College of Science.
In 2003 in response to a statewide emergency services crisis Clifton co-founded Save Our ERs which led to enactment of legislation that increased funding for Texas trauma centers. From 2006-2007 he was awarded a Robert Wood Johnson Health Policy Fellowship in the U.S. Senate where he served in Senator Orrin Hatch’s office.
In 2009 Dr. Clifton authored Flatlined: Resuscitating American Medicine, Rutgers University Press, which proposed aligning provider payment with the quality and efficiency of care. In 2010 Clifton acted as a consultant to the Texas Health and Human Services Commission and advised members of the Texas legislature which led to implementation of some of the principles proposed in Flatlined in Texas Senate Bill 7, 2013. In May of 2012 Dr. Clifton completed an 18-month assignment at the U.S. Department of Defense where he was an advisor to the Assistant Secretary of Defense for Health Affairs co- leading a group that developed a blueprint to improve the TRICARE health benefit.
Dr. Clifton has been a Presidential appointee to the Defense Health Board and served as a trustee of the Vivian L. Smith Foundation for Neurological Research. He is also CEO and founder of ACTIN Care Groups which provides an ACA-compliant health plan to locally-based employers in the Northern Illinois area. ACTIN offers its Members and Employers the best medical outcomes at the lowest possible cost.

Charles Mancuso grew up in Bryan, Texas where he worked for his father’s equipment rental business from a young age. Charles followed in his father’s footsteps and opened several rental businesses, We Rent It, BCS Stop and Go Potties, and The Big Dumpster. In 2009 Charles sold We Rent It and began focusing on his other businesses.

As The Big Dumpster expanded Charles realized the majority of the materials inside of the dumpsters he rented contained recyclable materials and construction debris. He began developing options to divert these materials from the landfill to decrease disposal cost. Eventually, these ideas led to the formation of Brazos Valley Recycling (BVR), a state certified recycling and composting facility. Brazos Valley Recycling (BVR) and The Big Dumpster quickly grew into one of the largest recycling facilities in the state of Texas, recycling well over 300 tons of material each day.  BVR has thousands of pieces of recycling equipment ranging from compactors, balers, dumpsters, to recycling bins across Texas.  Charles also obtained a class four landfill permit to compliment his roll-off and recycling companies. Over the past decade, Charles pioneered innovative waste and recycling practices throughout Texas. The following are a few of the examples of this:
● Working with large corporations like Pepsi Co to get closer to achieving their zero waste initiatives by composting liquid waste and recycling packaging.
● As the exclusive recycling partner for Texas A&M University, their recycling diversion rates rose from under 5% to over 65% over the course of five years. He was also responsible for coordinating, collecting, and hauling of all recyclable materials at Kyle Field, one of the largest stadiums in the country.
● Implemented thousands of recycling programs ranging from construction projects and municipalities to hospitals, schools, and businesses.

In the summer of 2017, Charles had sold his recycling company in June and started his Waste Equipment Company in July. In August of 2017 Hurricane Harvey hit. It was one of the strongest storms to hit the Texas coastline in 50 years. Days later Charles was called upon to assist in the hurricane debris relief efforts. Charles quickly established
debris removal zones, debris drop off areas, implemented debris removal policies, and assisted local municipalities on locating the equipment and resources they needed. Charles volunteered his time and refused to accept any payments or compensation for his efforts. 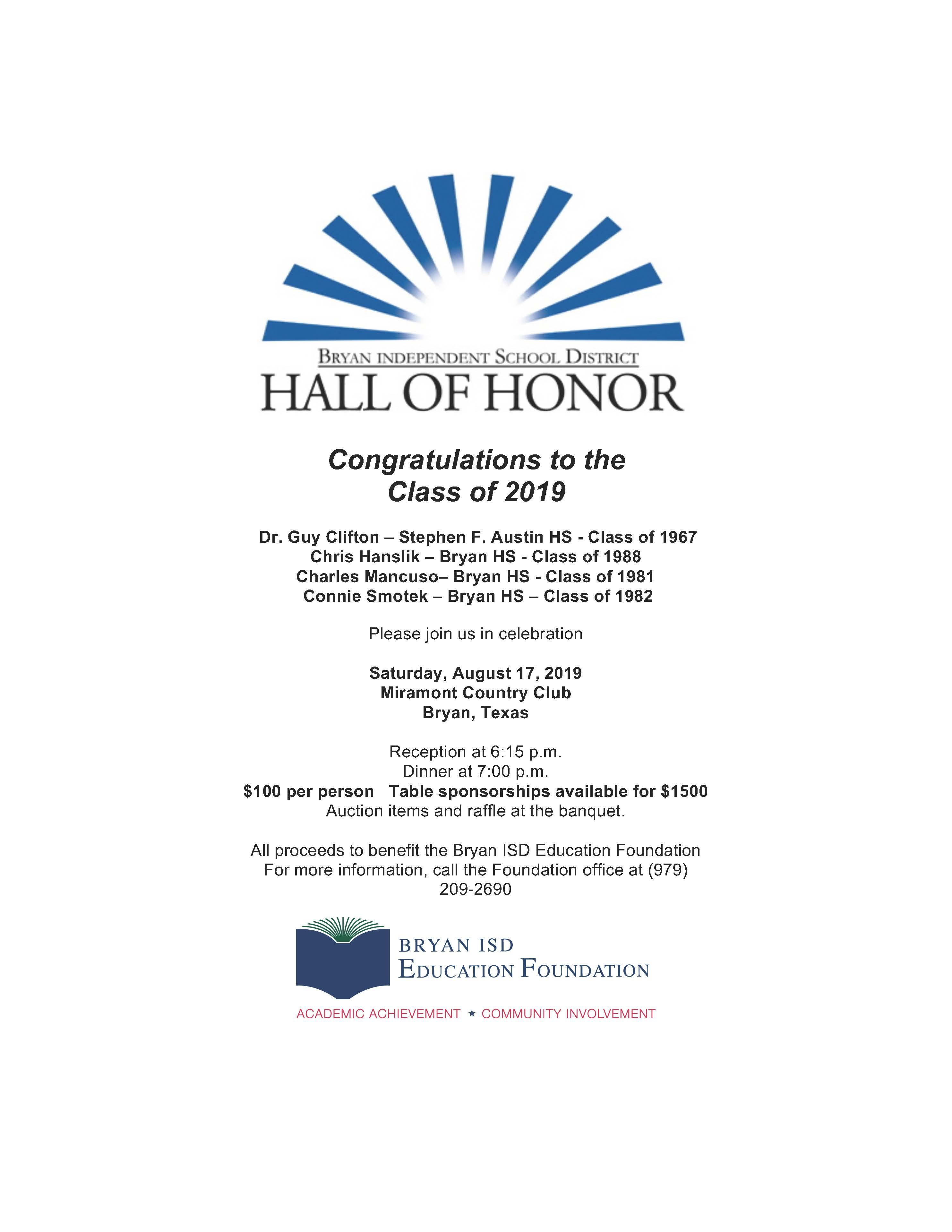 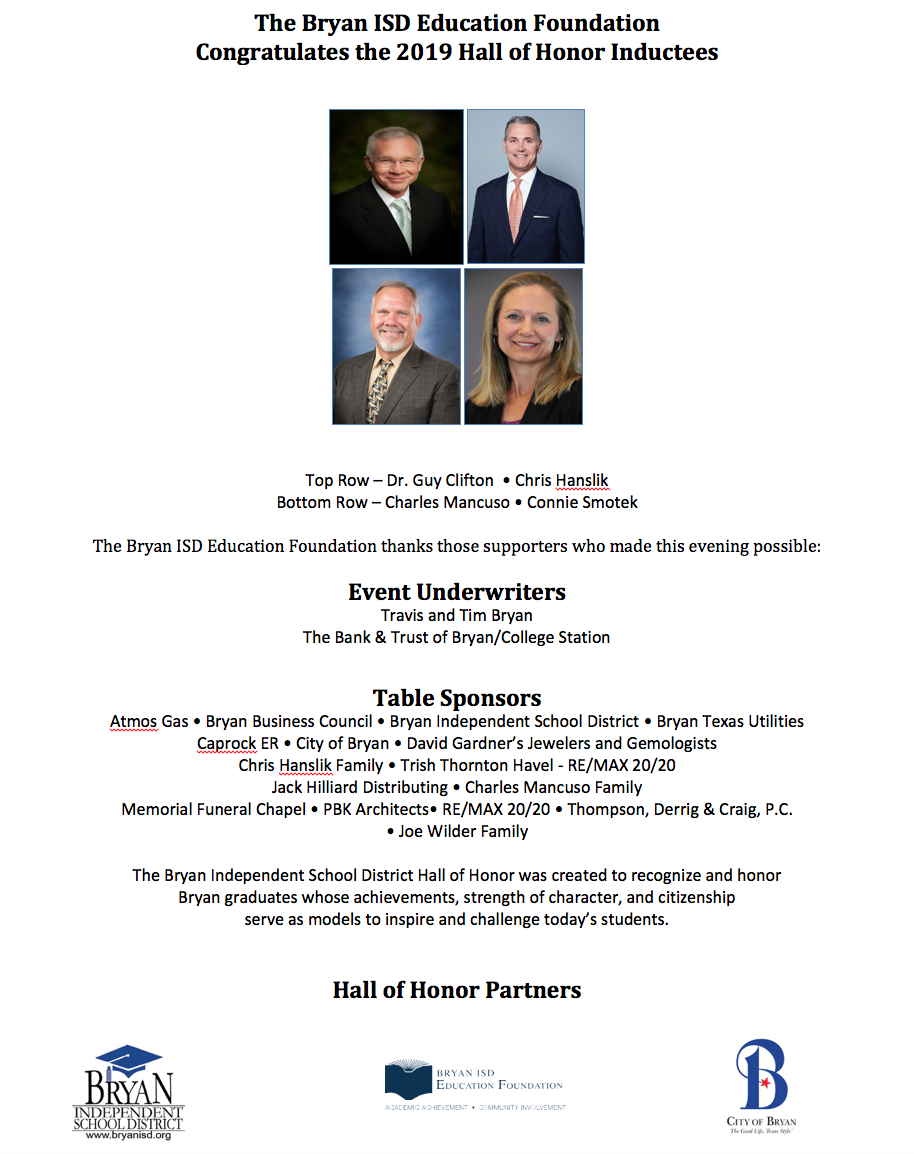 PAST HALL OF HONOR HONOREES